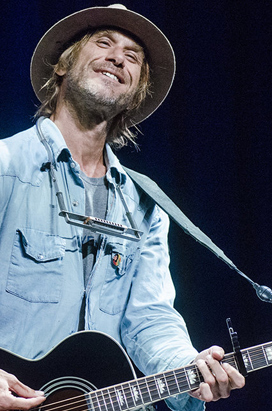 Todd Snider has described the First Agnostic Church of Hope And Wonder – the namesake for his remarkable nineteenth solo album out now on Aimless Records / Thirty Tigers – as a house of worship presided over by “a preacher who’s full of shit, and when everyone starts to realize it, he asks God to help and God does, proving once and for all that God is hilarious.” With this premise, the groundwork is laid for Todd’s one-of-a-kind writing style to thrive – irreverent humor, somehow seamlessly woven with intricate and poignant storytelling. In the case of the First Agnostic Church of Hope and Wonder (a concept derived from Todd’s Sunday livestreams throughout the pandemic), much of that profundity comes in the form of remembering friends and mentors lost too soon.

In 2015, Lilly Winwood (daughter of classic rock legend Steve Winwood) needed a vacation. The countryside of her native Gloucestershire, England felt too familiar, and London was, in her own words, “so big, so expensive, and reeked of havoc and loss and all that good stuff.” So Winwood hopped on a plane to Nashville, where she’d spent childhood summers visiting her mother’s family. The plan was to come back to England after a few weeks—but the vacation never ended.

Lilly released her Debut album ‘Time Well Spent’ Early 2021. In December 2019, Winwood’s music video for her current single “Few More Records,” entered into rotation on CMT’s CMT Edge. Throughout the video, Winwood expresses the story of the song by portraying someone burnt out on the road, struggling with inner demons, but knowing there is still a job to do. She wanted to show fans that is a possibility to embrace demons by dancing with hers throughout the video